Married Niri shares a forbidden passion with Sumon, who introduces her to a world of fresh, wild delicacies. But as their unconsummated desire mounts, the two are pushed inexorably towards transgression and taboo.

Rising Indian writer and director whose first film Kothanodi received the Asian Cinema Fund’s Post Production Grant and premiered at Busan International Film Festival 2015. Ravening is only his second feature film, for which he also wrote the screenplay.

Ravening (Aamis) is the story of two people whom love finds, and yet with too many boundaries between them for their love to find fruition, it degenerates into self-destruction. The film explores a cold nihilist streak of life and has been designed to provoke, not shock. At its core, Ravening is envisaged as being an immersive experience for audiences, where they slip into and walk in the lovers’ shoes and feel what they are going through.

Multi-faceted Lima Das is an acclaimed Sattriya dancer, an Endodontist by profession and also a lecturer at the Regional Dental College in Guwahati, Assam. Ravening is her first foray in acting for feature films.

Based in Guwahati, Arghadeep is Lead Vocalist of the indie band The Bottle Rockets. Ravening marks his acting debut for films. 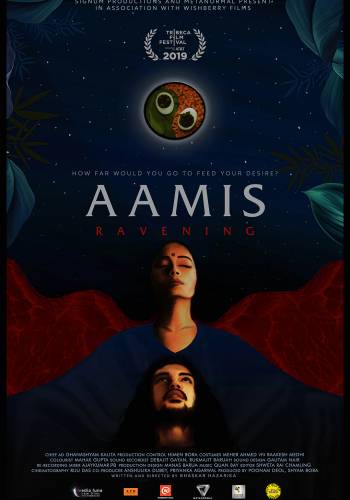