Xelilo, a disturbed man, lives in an abandoned store and walks endlessly through the streets of a Kurdish village in the south east of Turkey. He is curiously being noticed by Cengo, a 12-year old boy, living more or less happily under poor conditions with his friends and family, selling chewing gum for a living. Cautiously they become friends and Cengo leads him to the meeting point under the German bridge, where the children live through carefree moments.
When the Turkish military takes power in 1980, a curfew is imposed on the city. The life of Xelilo and the other Kurds is endangered. Who are the winners and losers in this conflict?

Shiar Abdi was born1973 in Zamar, South of Kurdistan, Iraq. Being raised in Syria, he left his home at the age of 20 and went to the Netherlands. In 2005 he came to Germany, where he studied film direction. Shiar Abdi made several short films, which has been selected at international festivals. In 2011 he finished his first feature film MESH.

The coup in Turkey at the 12th September 1980 has had an unacceptable and negative impact on the people. Mostly the Kurdish people suffered under this military coup and many of them, who were never involved in politics, became victims: Hundreds were imprisoned and subjected to the worst forms of torture, women were widowed and children were orphaned. MESH takes us back to those dark days and shows the misery and pain, through the Kurdish protagonists.
Xelilo und Cengo are an example of Kurdish people who lived under that coup. Xelilo is a man of a special personality. He keeps silent, but in his silence he condemns the coup and stands up against it. His silence is his most powerful strength.
I wanted to show the political, social and economic situation of the Kurds through Xelilo's silence.
Xelilo has separated himself from society, remains in his own world, but establishes a strong friendship with the children of the village especially with Cengo. With that friendship, Xelilo sees his lost hopes in those children.

Selamo (Abudel Selam Kilgi) was born near Nusaybin in the Kurdish region of Turkey in 1966 and lives in Germany. He is a very well known comedian in his home country, live on stage as well as on Television. In MESH he plays his first dramatic role. 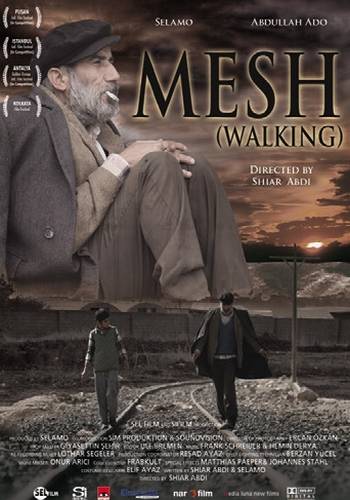