In a world where a human life lasts only one day, and so everything only happens once, Benny and Gini lose their hearts to one another and feel one day is not enough.

There is one way out: they can flee to hell – a world where you can get drunk, stay in love, have sex and stay together for the rest of your life.

Benny and Gini want to take this chance and commit a murder. For this terrible act they’re sentenced to death. But during the execution something goes wrong and the two lovers do not arrive in hell at the same time. Now they desperately have to search for each other in this new world of repetition.

Mark de Cloe studied at the Rietveld Academy and the Maurits Binger Institute in Amsterdam. With his final exam films LUCKY STRIKE and RALENTIR he won the Grolsch Film prize in 1992. In 1998 he won the NPS prize for Best Short Film for GITANES (1997, VPRO). The same film was awarded at the International Film festival Avanca a year later. For the NPS Mark de Cloe made a short based on the novella EVEREST in 1998 and in 1999 the short film MOËT & CHANDON. In 2002 he also made a series of 34 short films on love, BOY MEETS GIRLS STORIES. For one of the shorts, ALLEEN / ALONE (#28), Mark received his second NPS prize for Best Short Film. A sequel to this series, LIFE IS BEAUTIFUL (Submarine, 2008), is now in production.

In 2004 he made the film VALSE WALS / FALSE WALTZ together with Orkater. This was the closing film at the Nederlands Film Festival in 2005 and received two Golden Calf nominations. As well as a run in the theatres during the winter of 2005/2006, FALSE WALTZ was also screened at the Dance On Camera Festival in New York and LA. In 2006 Mark de Cloe won the prestigious Prix Italia in the category Performing Arts and in 2007 the film was nominated for an Emmy Award.

In adapting the book into a film script, I did not only want to tell a recognizable story, but also to translate it into my own visual narrative style.

To my mind, form and substance can augmented each other much more than is generally seen in Dutch cinema. The visualisation is often only reflected on when the script has already been finished. In many cases, the image then illustrates the story and there is no question of a dialogue between form and substance.

Life in One Day is a love story with time as its most important secondary theme. What happens when two lovers who grow up in a world of intense singularity (once-in-a-lifetime) manage to find their way into a world of repetition and re-experience?

Countless kisses are forgotten, but the first kiss is indelible. 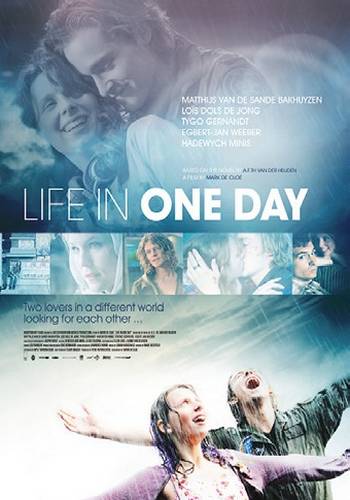