Cheba (Adriana Paz) and Ángeles Miguel (Gabriela Cartol) got pregnant from the same man, Silvestre (Gustavo Sánchez Parra). He was Cheba’s lover while her husband was working abroad. He is also Ángeles’s stepfather. Now Cheba’s husband is back. On another hand, Ángeles’s mother doesn’t want her daughter to keep the baby. The two women need to decide what to do with their new born children.
They have to confront their own needs and desires. “La Tirisia” portraits the life of two women – and their friends -- in an isolated village, where they all live trapped, forgotten and sick with Tirisia, an illness of the soul.

Jorge Pérez Solano was born in Oaxaca, Mexico. After graduating in Direction and Screenplay and in Communications Sciences, Solano worked as Assistant Director, Film Editor, and Second Unit Director for many Mexican films. He made documentary and cultural programming for four main TV channels in Mexico. His first feature film, SPIRAL, participated in several film festivals. LA TIRISIA is Solana's second film.

“When I was shooting my first feature in a small town in Oaxaca, I saw a lot of children living with their grandparents because their mothers abandoned them to live with another man. In LA TIRISIA I wanted to explore this problem from the women side. Their struggle to reach happiness again and how it’s impossible, because these women and their communities get sick with a soul disease called Tirisia, a perpetual sadness.”

Adriana Paz
After studying Theater at the Mexico National University, Paz has participated in several short and long feature films. Born in Mexico City, Adriana Paz has worked with very prestigious directors: Carlos Carrera, Carlos Cuarón and Jorge Michel Grau among others. She played in BACKYARD (Carlos Carrera) and won several awards and an Ariel nomination for RUDO Y CURSI Best Supporting Actress. Paz is the main actress in 2014 HILDA (Andrés Clariond) and LA TIRISIA (Jorge Pérez Solano) – both to be released in 2014. 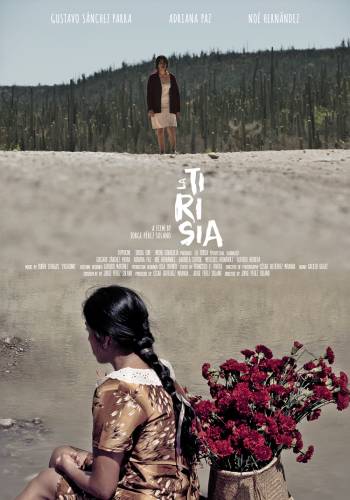