Five-year-old Jordan rides peacefully in the back seat of her mother's car during a cross-country road trip - until they swerve to avoid a deer on a dark mountain road -- and the small girl is faced with a series of challenges that change her life forever.

Their car plunges into a deep ravine, and Jordan's mother is trapped in the wreckage. Miraculously emerging with only minor injuries, Jordan promises to bring help, making a harrowing journey through the dark forest, where she is forced to confront dangers both wild and human.

Jordan finally manages to reach a small New Mexico town and find its Native American Sheriff, Gil Lujan. But Lujan's search for Jordan’s missing mother leads to emptiness…as if there never was an accident.

Finally, Lujan receives word that Jordan’s mother has walked into the local medical clinic, where his wife Bernie is employed as head nurse. Lujan races Jordan to the clinic; but the happy reunion they anticipate is ruined the moment Jordan sees the woman waiting there for her - Jordan knows it’s not her mother.

In spite of the woman's tears and open arms, the baby pictures and birth certificate she carries -- Jordan insists her real mother is still out there, waiting in the woods.

What follows is a story of psychological suspense and danger about the ferociously powerful bond between mother and child - and how far each one will go to protect it.

Stuart Hynson Culpepper made his directorial debut in 2000 with the feature film THE ORIGIN OF MAN, (“Superb debut” – LA Weekly) which premiered at the Taos Talking Picture Festival. The film was nominated for Best Debut at The Munich International FF, won the audience award at The Karlovy Vary International FF, was a competition selection at The Sao Paulo International FF, screened at The Montreal World FF, and received international distribution. Recently, he directed THE CAPTIVE, winner of the “Best Web Series” award at the 2008 New York Television Festival. He is a Partner in culpepper/williams, a company creating feature films, television and stories for new media.

Jordan is a psychological thriller in the mold of many successful films -- from the classic “Bunny Lake is Missing” to “The Forgotten” - where the bond between mother and child is threatened by sudden events that seem to have erased and/or replaced the presence of a loved one. But, rather than taking the well-travelled road of a mother searching for a lost child, Jordan focuses its story completely through the point of view of a five-year-old girl; the lost child becomes the hero, driving our story to an emotional and triumphant resolution.

In its tone, Jordan is always a film about the strength of family. We envisioned Sheriff Gil Lujan and his family as natives of the contemporary Southwest, living in the modern world but still in touch with the Native American roots that ground them in a sense of identity and purpose. By contrast, Jordan and Natalya are both foreigners and wanderers, constantly in motion, relentlessly driven to seek the identity and wholeness that eludes them.

The film’s underlying appeal to audiences is universal and timeless. The story evokes the familiar archetypes of fairy tales: the evil forest, the witch in the candy house, the loyal woodsman and the determined girl who uses her wit and cleverness to save herself from danger. In essence, all fairytales are action/adventure stories – and Jordan is just that.

Isabel Kate Culpepper - Jordan
Isabel Kate Culpepper began her film career at age three when she played Maddy in PUTTING THE PIECES TOGETHER, a healthcare entertainment project produced by her father, Stuart Culpepper. She also played a cameo role in THE CAPTIVE before making her feature film debut as Jordan. Isabel is a second-grader who enjoys ballet and musical theater as well as her favorite subjects, math and science.

Gregory Zaragoza - Gil Lujan
Gregory Zaragoza appeared in the final season of THE SOPRANOS as the “Croupier,” in THE LAST OF THE MOHICANS as the “Abenaki Chief,” and in THE WAR THAT MADE AMERICA as “Tanaghrisson,” and has been seen on LAW & ORDER, THE JURY, NORTH & SOUTH and many other television programs. He performed on Broadway in ANNIE GET YOUR GUN as “Chief Sitting Bull” and in MACBETH as the “Apparition” and has done numerous plays throughout the United States. Gregory is proud of his Pima heritage. A lawyer licensed to practice in New York and California, he devotes his passion to his acting career, his three talented children who are also working actors, and Shiuga, his wife of 22 years.

Liezl Carstens - Natalia
Liezl Carstens was born and raised in Pretoria, South Africa, where she trained with Stephanie van Niekerk before immigrating to the US in 2001. She was cast in the lead role of “Secrets and Other Indulgences” at the Words Afire festival before signing with the Eaton Agency in 2006, when she began auditioning for films. Since then she has appeared in LIVING HELL, THE DONOR CONSPIRACY, and WILD HOGS with John Travolta, Martin Lawrence, Tim Allen and William H. Macy. She landed her biggest role in December 2006, cast alongside Steven Seagal in URBAN JUSTICE. Two weeks after JORDAN wrapped, she was cast as the female lead in another Steven Seagal film, THE KEEPER.

Angelique Midthunder - Bernie Lujan
Angelique began her acting career when she answered an ad for an "open call" in the mid 90s. She has been at it ever since, working internationally both in front of and behind the camera. Last year Midhthunder carried a role in LINEWATCH with Cuba Gooding, Jr. Most recently she appeared as a stunt performer in TERMINATOR SALVATION (starring Christian Bale), GAME (starring Girard Butler), and LEGION (starring Lucas Black, Dennis Quaid, and Tyrese Gibson). 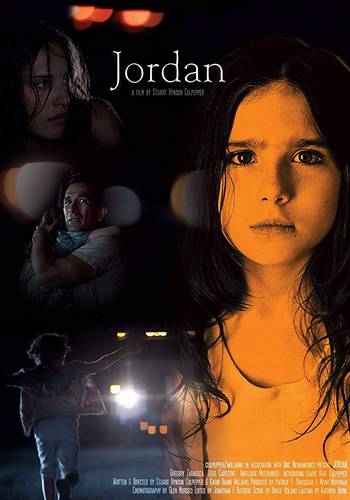