New Year’s Eve, Simone decides to go out alone. The next morning, she wakes up in a strange car, next to a strange man. Few weeks later, she discovers she’s pregnant. By coincidence, she runs into the stranger again – the handsome Hannes – and is surprised to find out that, contrary to her expectations, he’s actually happy about the pregnancy and wants to live with her. Could this be the face of happiness?

While Hannes works in a hospital at a palliative care station, nursing to the dying with extraordinary tenderness, Simone renovates their shared, little home. An attractive neighbor fuels Simone’s jealousy. The larger Simone’s belly grows and the more extensively Hannes’ integrity warms the nest, the more oppressive their homemade prison appears. t.

Isabelle Stever was born in 1963 in Munich. After studying Mathematics in Berlin and New York, she studied Film Directing at the German Academy of Film & Television (dffb) in Berlin. Before BLESSED EVENTS her portfolio includes two award-winning features, PORTRAIT OF A MARRIED COUPLE (2002) and GISELA (2005), she also contributed with an episode to the omnibus film GERMANY ´09 (2009).

My cinematic goal was to consistently take on Simone’s perspective, so that her horror – which seems to come out of nowhere – becomes experienceable for the viewer. In order to atmospherically underscore the constant possibility of change and dissolution, the settings in the film are intentionally dissonant. The framing and the omissions of the montage create a space for the turbulence inside Simone, from which disaster might erupt. 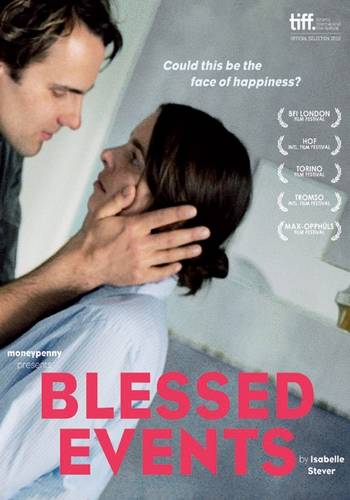